This factsheet presents a summary of the distress cases witnessed in August 2022 by Sea-Watch’s Airborne Operations with the aircraft Seabird 2. (1) In August 2022 we flew in the Maltese Search-and-Rescue (SAR) zone only, conducting 14 operations over a total flight time of 74 hours and 49 minutes. We spotted 38 boats, carrying around 1,243 persons in distress. (2) Unfortunately, due to illegal restrictions put in place by the Libyan Civil Aviation Authority (3), Airborne was not permitted to monitor the Libyan Search-and-Rescue (SAR) zone and the human rights violations which continue to occur there. 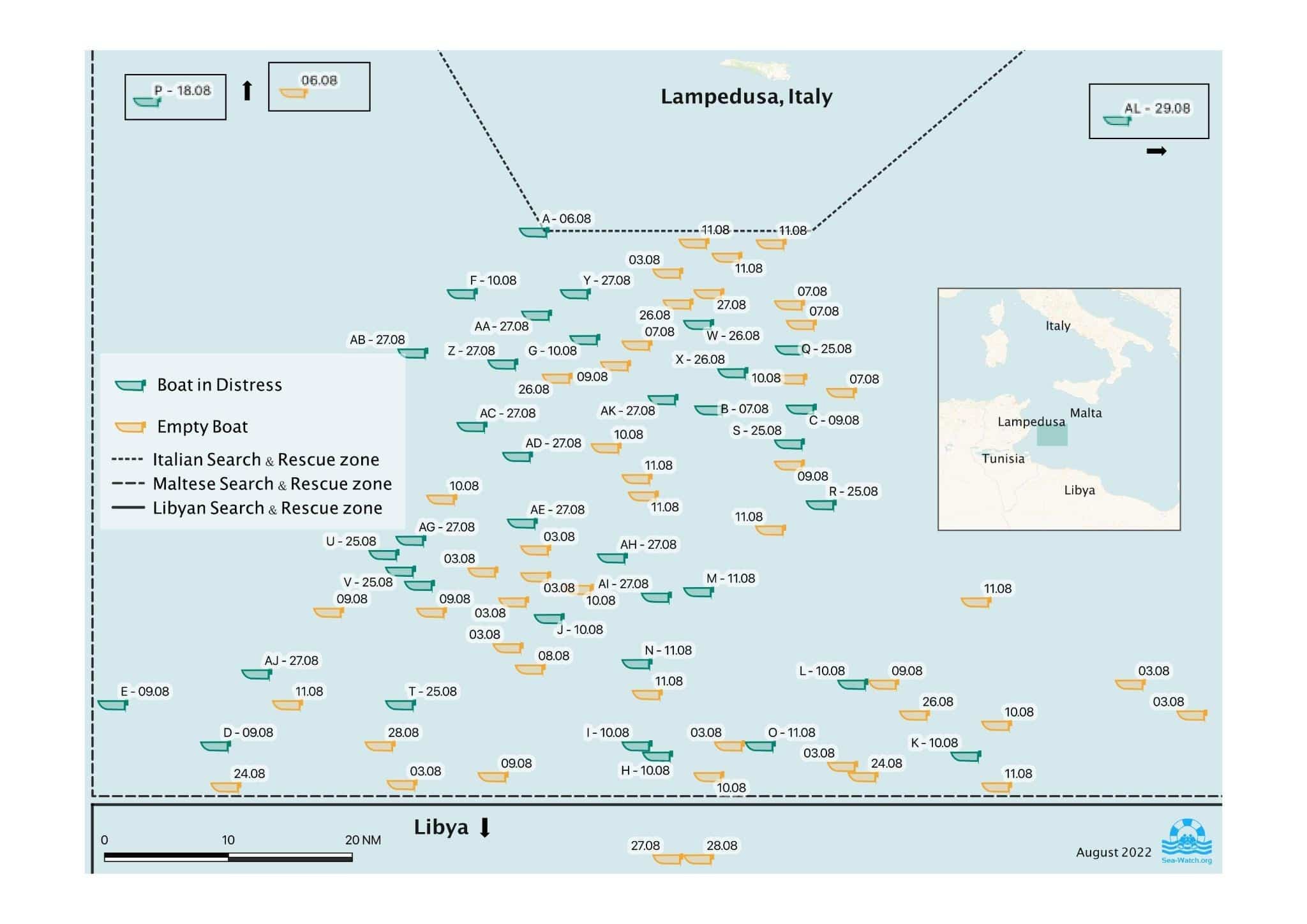 Overview of boats in distress and empty boats spotted

16 boats in distress, around 597 persons, were rescued by the Italian authorities or arrived independently to Lampedusa, Italy

1 boat in distress, around 20 persons, was intercepted by the Tunisian Coast Guard and pulled back to Tunisia

5 boats in distress, 277 persons, were rescued by the NGO vessel Ocean Viking (4) and disembarked in Taranto, Italy

1 boat in distress, 18 persons, was rescued by the NGO vessel Geo Barents (5) and disembarked in Taranto, Italy

The outcomes for 15 boats, with around 331 persons, remain unknown

The NGO vessel Ocean Viking is operated by the NGO SOS MEDITERRANEE.

The NGO vessel Geo Barents is operated by the NGO Médecins Sans Frontières.

Details and outcomes for boats in distress and empty boats

09.08., distress case D, around 10 persons: Merchant vessel did not assist persons in distress, eventual rescue carried out because of civil support and coordination. Seabird 2’s crew sighted the persons in distress in the Maltese SAR zone. The merchant vessel Wine Trader was in the vicinity and heading to the position as communicated with Seabird 2’s crew, however the vessel did not render assistance. The responsible shipping company was informed on the phone and via email. In the evening, the NGO vessel Astral (6) located the persons. The persons were then ultimately rescued by the Italian authorities and disembarked in Lampedusa, Italy.
11.08., distress case M, 121 persons: Successful civil coordination, NGOs filling the gap left by authorities. On 11.08., the civilian aircraft Colibri 2 (7) informed authorities and NGOs about a boat in distress. Shortly afterwards, Seabird 2’s crew sighted the persons in the Maltese SAR region. Due to the lack of state rescue assets in the Mediterranean, the NGO vessel Nadir (8) changed course towards the position and was then able to assist the persons two hours after Seabird 2’s sighting. The people were finally rescued by the Italian Coast Guard in the evening and disembarked in Lampedusa, Italy.

Tunisia cannot be considered as a place of safety for people rescued at sea, as defined by the International Maritime Organization’s Resolution MSC. 167(78). Firstly, there exists no domestic asylum system in Tunisia – meaning that asylum-seekers are left without legal protection. Persons on the move are arbitrarily detained, since unauthorised entry and stay are criminalized, while the legal framework related to detention remains unclear (10). Furthermore, Tunisia has previously conducted several chain-refoulements to other states, including Libya (11)– meaning that there is a risk that persons on the move are brought to other unsafe countries. Finally, people on the move, but also other persons affected by discrimination and criminalization, in particular LGBTQI* persons, can in Tunisia be subjected to human rights violations (12).

On 25.08., our ground crew routinely called the Libyan Joint Rescue Operation Centre (JRCC) in order to ask for open distress cases at sea. The JRCC Tripoli provided 6 positions for distress cases, stating that the patrol boat PB 301 of the so-called Libyan Coast Guard had intercepted 5 out of the 6. The sixth boat was rescued by an NGO, according to the officer on the phone.

On 25.08., Seabird 2 spotted a total of 6 boats in distress. Three of the boats, distress cases R, S and U, concerned approximately 40, 119 and 66 persons. Rescues were made possible once again through joint and successful efforts by the civil fleet.

Distress case R first reached out to the Initiative Watch the Med – Alarm Phone, which informed authorities as well as civil actors present in the area, so that the civil monitoring aircraft Colibri 2 was subsequently able to spot the people. At that time, the boat’s engine was not running and the persons were in acute distress at sea. The NGO vessel Ocean Viking acknowledged the distress call and changed course towards the boat. Seabird 2 was also able to spot the boat. In the evening, Ocean Viking conducted a rescue and took approximately 40 people on board.

Distress case S was first spotted by Colibri 2 and then by Seabird 2. The NGO vessel Ocean Viking reached the position of the people in distress approximately 3 hours later and was able to safely embark 119 persons.

Seabird 2 spotted distress case U first in the afternoon of 25.08., informing the authorities and civil actors present in the area. On 26.08., Seabird 2 sighted the boat again, which was at that time accompanied by two fishing vessels which were asking for help via the emergency radio channel 16. Seabird 2 sent out 2 mayday relays (13) on behalf of the people in distress. The NGO sailing vessel Astral acknowledged the distress calls and headed towards the position in order to assist the persons. During the afternoon of 26.08., the Italian Coast Guard conducted a rescue and disembarked the persons in Lampedusa, Italy.

29.08., distress case AL, 18 persons: Merchant vessel chartered by the European Fishery Control Agency (EFCA) leaving a distress case unattended, apparently instructed by Malta, eventual rescue by NGO vessel. Seabird 2 spotted an overcrowded boat in distress with children on board and accordingly informed the authorities and civil actors in the area. The NGO vessel Geo Barents acknowledged the information and confirmed its arrival on scene several hours later. The merchant vessel Lundy Sentinel, flying the Portuguese flag, was in close proximity to the boat in distress. Seabird 2 at first unsuccessfully attempted to contact the

merchant vessel, where the vessel later confirmed that it would change course towards the boat in distress. Shortly afterwards, the Lundy Sentinel moved away from the distress case and hence refused to conduct the rescue. Finally, the NGO vessel Geo Barents arrived to the scene and took all of the people safely on board.

In August 2022, with its aircraft Osprey 2 and Osprey 3, we must assume that the European Border and Coast Guard Agency Frontex was involved in the narratives for at least 2 boats in distress, concerning around 28 persons, also sighted by Seabird 2’s crews in the Maltese SAR zone. Both boats were eventually rescued by the Italian authorities and disembarked in Lampedusa, Italy.

In August 2022, the air crews also overheard communications over the radio regarding 4 possible boats in distress which were not sighted by Seabird 2.

In August 2022, Seabird 2’s crews also spotted 48 empty boats. According to their markings, 11 of these empty boats are believed to be the remnants of rescue operations conducted by the Italian authorities. The outcomes for 37 boats remain unknown.

These operations highlight once again:

(1) Since 2017, together with the Swiss NGO Humanitarian Pilots Initiative, Sea-Watch has monitored the central Mediterranean sea, presently with its aircraft Seabird 1 and Seabird 2.

(2) These numbers are based upon the estimations of Seabird 2’s crews as well as numbers which the initiatives Watch The Med – Alarm Phone and Mediterranean Hope-FCEI have provided to us.

(3) Since the beginning of March, the Libyan authorities have illegally denied entry to the Libyan Flight Information Region (FIR) for our aircraft Seabird 1 and Seabird 2. See also Airborne Monthly Factsheet for the months of February and March 2022, and https://twitter.com/seawatch_intl/status/1545699184447307776.

(4) The NGO vessel Ocean Viking is operated by the NGO SOS MEDITERRANEE.

(5) The NGO vessel Geo Barents is operated by the NGO Médecins Sans Frontières.

(6) The Astral is operated by the NGO Open Arms.

(7) The aircraft Colibri 2 is operated by the NGO Pilotes Volontaires.

(8) The sailing vessel Nadir is operated by the NGO RESQSHIP.

(13) A “mayday relay” is an emergency procedure that provides information about a boat in distress via maritime or aerial ra- dio, requesting any asset in the vicinity to assist